Primal Scream / MC5 / Davis, Kramer, Thompson-Black To Comm (2011 UK 24 track 2 CD Plus DVD Box Set issued thru Easy Action ‎– EARS042SP) Back in 2008 Primal Scream – at the time still trying to steer clear of the chemical abyss into which so many of the band’s 60s heroes had fallen – appeared at the Meltdown Festival in London alongside surviving MC5 members Wayne Kramer, Michael Davis and Dennis Thompson (alias DTK-MC5). With a common heritage in drug abuse and intra-band tension, this was a marriage made in rock’n’roll heaven.

After three years the concert has been released in a 2CD/DVD boxset. As concert packages go, this is a doozy. Led by the rake-thin and cognitively complex Bobbie Gillespie, Primal Scream is in psychedelically good form. With tracks spread across the breadth of the band’s drug-addled career – Accelerator, Miss Lucifer, Rocks, Swastika Eyes, Shoot Speed Kill Light, Kowalski, Beautiful Future – Primal Scream is a kaleidoscopic force to be reckoned with.

The DTK-MC5 set is saturated with the unbridled passion of rock ’n’ roll. William DuVall – sometime front man with the recalibrated Alice in Chains – is arguably the definitive surrogate Rob Tyner, replete with afro and gravelly tones. With his stars-and-stripes guitar and grimacing duck-walk Wayne Kramer is the perennial showman, while bass player Michael Davis is as reliable as he manifestly wasn’t back in the day. On drums Dennis Thompson fires beats with the ferocity of a mid-western National Guardsman following orders to suppress adolescent insubordination.

The encore is murderous. The members of Primal Scream join DTK-MC5 on stage for a killer set including I Can Only Give You Everything, Primal Scream’s Movin’ On Up and Rama Lama Fa Fa Fa. John Sinclair, MC5’s original ideological benefactor, shuffles on stage to offer some choice lines of Rob Tyner free-jazz rhetoric in the infamous MC5 freak-out jam Black to Comm. It’s not the Grande Ballroom, but it’s on the same wavelength 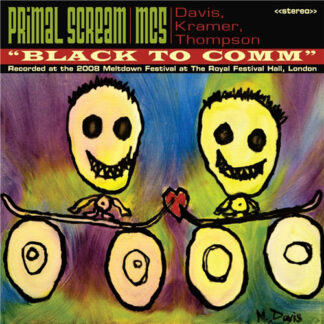