The Weight – In Control LP

A few years ago a new band appeared on the Austrian music scene. What they had to offer seemed somehow different from most of their colleagues, although, it was clearly rooted in what we consider Retro Rock. Hence, one could think of two different scenarious, most likely to happen: THE WEIGHT would either disappear like so many of the 60s and 70s nostalgia bands that pop up only to vanish immediately or they would use the momentum to establish themselves as the highly acclaimed act they are today. Luckily, THE WEIGHT chose to opt for the latter. But as we know the road for rock acts in today’s music scene tends to be long and dusty and therefore, during the past two years THE WEIGHT have had to prove their will and stamina: constant touring, countless interviews and many live and studio sessions formed a band that appears to finally be ready for the next bold step that will define their musical career.
IN CONTROL, the title of their new full length studio record seems like the embodiment of this insight and at the same time, given the volatility of today’s music business and the impuissance of an independent act like THE WEIGHT, it almost seems like a bitter and sarcastic inside view. Kindly, THE WEIGHT leave no doubt that there is more truth to the title than one could believe at first glance: “The times may be hard for musicians like us, but if you’ve got some skills you can do it pretty much by yourself. During the production of our latest record we were in full control of almost every creative and technical procedure. I guess that’s what makes it pure and real but, of course, there is also one downside: You can’t rely on other people’s work. The decisions are all up to you which means that there will be no one to blame when it turns out badly.”
Consequently, the new THE WEIGHT record sounds even more particular than its predecessor. The four musicians wrote music that no longer seems to be regardlessly classifiable. Songs like A Little Bit of Music still breathe the same air as Hard Way from the first album, but one can sense the now completed absence of compromise and dither. “The new record does mirror the events of the past few years. We have grown as men as we’ve done as musicians. I think we wouldn’t have had the guts to record songs like Almost Gone or Down the Line three years ago. Now we do” Therefore, what strikes most about IN CONTROL is the variety of its musical ideas and identities that share a common ground in the work of four individuals to create something that is more than the sum of its parts. 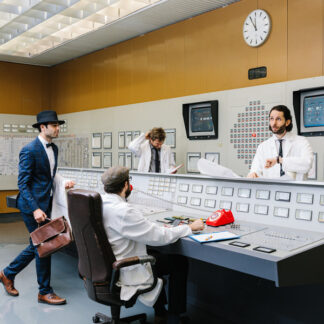