First ever reissue of 80s Australian teenage pop oddballs; includes extensive liner notes based on interviews with band members. RIYL: 80s Flying Nun, Television Personalities, B-52s. First pressing on pink and blue cloudy swirl vinyl. Vinyl comes with extensive images and liner notes, plus download card including six digital bonus tracks. Wide-eyed psychedelic new wave from Australia’s youngest composing and recording band. Tangled Shoelaces were aged 10-14 when they first started in a leafy suburb of Brisbane in 1980. The band centred around three babyfaced siblings Stephen, Lucy and Martin Mackerras. Lucy and Martin were musical prodigies and Stephen a precociously talented songwriter. They opened for wildly inappropriate acts like Dead Kennedys and John Cooper Clarke before they were old enough to drink in Australian pubs. By the time they broke in 1984, up with just one 7 inch single to their name, the oldest members were still only 18. Chapter sifts through an archive of recordings made at the legendary studios of Sydney label M Squared, home to fabled Australian post-punk artists like Systematics, Scattered Order and Ya Ya Choral. Turn My Dial presents 22 tracks, most of them previously unreleased, of the smartest, catchiest, most eccentric teenage pop you’ll ever hear. “A record of imagination and diversity, of engaging innocence and muted expressiveness, of breadth and depth” 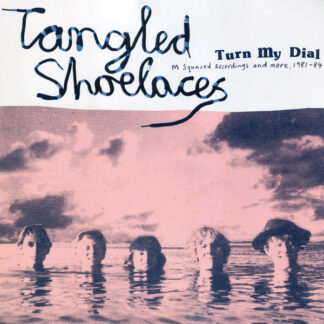