Despite ‘I Wanna Make You’ hitting lead-off as the first track on Numero’s 2012 ‘Buttons’ compilation of rare Illinois power pop, if one had inserted sales during the band’s original lifetime as a measurable statistic, Chicago’s Prettyboys’ SABRmetric score would have seen them riding the pine in the basement of the AL Central. Thankfully, this poppy ensemble gets another at-bat with this fully-authorized reissue of their one and only single self-issued on the band’s own Bow Tie label in 1982. One of dozens of talented Chicago club acts passed over in their live heyday for the likes of Screams or Off Broadway, Prettyboys’ strength on display here on their self-produced 45 might well have been smoothed out or spoiled completely had they been picked up by a major label. Small compensation perhaps for Prettyboys’ members at the time, but today a must-have home run for fans of the slicker, more commercial end of the power pop spectrum. Reissued with the rarer alternate sleeve and available for legitimate purchase for the first time since the close of the Thirsty Whale, Prettyboys are finally primed to raise the pennant.

Be the first to review “Prettyboys ‎– I’m Falling / I Wanna Make You! 7”” Cancel reply 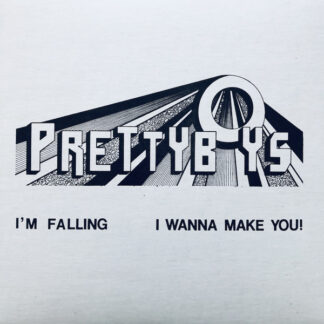