“For the past three years, Philippe Petit and Fernando Corona have regularly played live together, undoubtedly refining their collaboration with each new performance and finding the right balance between their respective sound worlds. The result is this album which equally finds its roots in Murcof’s modern classical influences and Petit’s coarse post modernist soundscaping. The album may barely reach the forty minute mark, but in the space of three tracks, Corona and Petitcreate a magnificent soundtrack which teems with haunting choral chants, lush string work and unsettling atmospherics. This album is rooted in ancient myths and legends, borrowing from Greek mythology for “The Call Of Circé”, daughter of Helios and powerful enchantress, and winged divine horse “Pegasus”, or from Nordic tales of giant squid-like sea monsters on “The Summoning Of The Kraken”. This very much characterises the epic proportions of this album, echoing in parts the amplitude of Murcof’s “Cosmos” (Leaf, 2007), and in others Petit’s equally ambitious “Off To Titan” (Karlrecords 2010), but they temper this with much more delicate moments, for which they assemble incredibly detailed and refined atmospheric passages. Clocking at just over twenty minutes, the opening piece “The Call Of Circé” is articulated around a series of sequences which range from stern, doom-like guitar stabs and harsh percussive noises to eerie choral laments and theatrical vocal flourishes. The haunting melodies and ambiences of the first half are slowly broken apart by the recurring thuds of metallic percussions. When these recede, the mood has become darker, grittier, more oppressive, and remains as such for much of the remainder. “Pegasus” recalls some of the more baroque treatment Murcof experimented with on his commissioned work for Les Grandes Eaux Nocturnes de Versailles, especially through his use of the viola de gamba as a primary sound source, but this sound source becomes corrupted as the track progresses, perhaps subject to Philippe Petit’s radical decay processing, until only a few distorted strands of grating bowed strings remain. With the last track, Corona andPetit opt for an overall softer, warmer atmosphere, but there is a lingering feeling of impending danger lurking below the surface of the whole piece. This is marked by the use of sparse percussions, magnified vinyl crackles and processed guitars and textures which, assembled in various combinations, weight heavily on the otherwise almost pastoral nature of the composition. Philippe Petit knows how to find collaborators with whom he can go beyond his own sonic universe and make them venture into unfamiliar territories, and he is an expert in making these collaborations gel perfectly. And this is one hell of a collaboration: two artists, each with this visionary approach, working together to create a truly magnificent piece 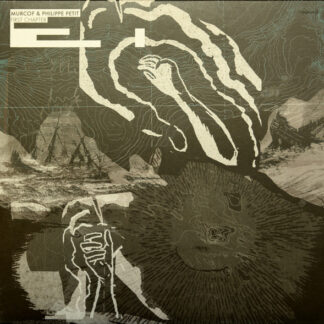