Still going strong, LOWRIDERS’s comeback album Refractions, new LP pressing is on Solid Red Vinyl! The progenitors of Swedish desert-rock return with their astonishing new record of fuzz-heavy stoner rock bliss! The new album from the progenitors of the Swedish desert rock scene, Lowrider’s previous album is a milestone in the global stoner rock underground, soundalikes to Kyuss or Fu Man-Chu, Lowrider manage to add impressive songwriting qualities to their works. Before Monolord, Graveyard, Greenleaf, and Truckfighters, one band stood at the dawn of Sweden’s Kyuss-inspired desert rock movement. With their groundbreaking debut EP and seminal “Ode to Io” album, LOWRIDER spawned thousands of imitators. Now, at long last, the progenitors return with blistering new album “Refractions,” delivering on their mythic status as founders of a worldwide phenomenon. ‘Lowrider’s ‘Ode to Io’ is an absolute landmark. It is essential. Quite possibly the best desert-style rock record not to come from the actual Californian desert.’ _ JJ Koczan / The Obelisk ‘Thunderous riff-rides like ‘Caravan’ and ‘Saguaro’ cannot be denied, and quite honestly leave a much more lasting impression than most anything issued by the likes of Nebula and even Fu Manchu.’ _ Ed Rivadavia / All Music Guide ‘Ode to Io is desert-rock in its purest and heaviest form. Almost the whole album is indeed explosive, fuzzy and straight to the point… the best definition of stoner-rock you could get.’ _ Nuno / Sputnik Music Lowrider paved the way for a whole generation of European fuzz rockers… there was Kyuss in the US, and there was Lowrider here.’ _ Beeho / The Heavy Chronicles 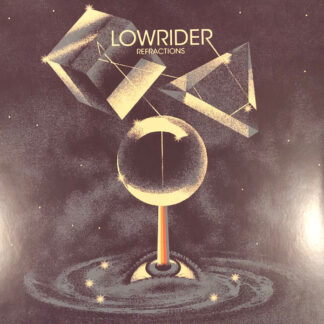