The Electric is the fresh new Soul/Hip Hop group formed by world renowned DJ and producer, DJ Vadim and is made up of the “hardest working man in show business” whose first LP came far back in 1996 by way of the Ninja Tunes-released ‘USSR Repertoire’, DJ Vadim himself, Chicago-based underground Hip Hop artist, TV/radio presenter and fashion designer Pugs Atomz and emerging UK soul singer/songwriter, Sabira Jade.

Together as ‘The Electric’, these three have amalgamated an eclectic mixture of Hip Hop, Soul and Electronic music rather beautifully, first on their BamaloveSoul and DJ Booth presented mixtape Hey You Guys which served as the apt prelude to the trio’s first release and now on their forthcoming debut LP Life is Moving, to make some amazing music that is not only innovative but also rich in harmony, flavour and most importantly – SOUL!

The Electric’s 16-track LP Life Is Moving is filled with sublime and beautifully crafted Hip Hop musical backdrops that are laced with hard-hitting basslines, heavy percussions, live music instrumentation, lush snyths, ample MPC goodness and arrangements as well as infectious, soulful and sultry vocals from Sabira Jade and a diverse flow with clever lyrics and wordplay from Pugs Atomz but that’s only half the story.

DJ Vadim’s skills and credentials as a producer can and should never be questioned and he shows just why on ‘Life Is Moving’ – almost all of the songs come exceptionally brilliant on the production side of things and for me, the musical milieus that he provides for Jade and Atomz are not only the highlight of what is a really good debut album from The Electric but they serve as the perfect axis for both Jade and Atomz to show off their vocal/rap and songwriting abilities.

On one of my early favourite songs from the album, ‘So Now You Know’, DJ Vadim provides a funky and hard-hitting Hip Hop beat laced with bold keyboard stabs, lush syths and a larger than life bassline for Pugs Atomz’ smooth flow and lyrics and Sabira Jade’s soft and sensual vocals to thrive and come alive on.

On the recently leaked ‘Overloaded’, Sabira Jade and Pugs Atomz are in full effect with 100% chemistry that’s thankfully evident on much of the rest of Life Is Moving, Atomz’ infectious flow and wordplay as well as Jade’s warm and alluring vocals which completely command this electro funky boombastic Hip Hop song from start to finish. 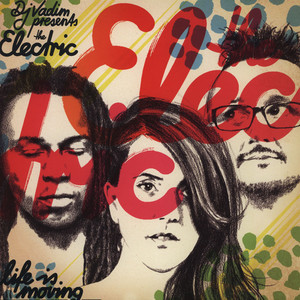