Aho: A Native American word that in Lakota means “hello”, in Kiowa it means “thank you,” and in Cherokee it is used at the end of a prayer similar to the use of “amen,” often accompanied by “Mitakuye Oyasin.” Adopted by the New Age community and defined by any number of its native meanings or to as a statement of “we are all related”.

Armed with a long-term affection for refractory spirits everywhere and informed by punk-rock and early stoner-rock, Coyote’s Arrow’s debut full-length brings the groove, the creativity and the sense of freedom, so much missing from today’s hard-hitting rock bands. Comprised of members of historic exponents of the Athens underground scene, like Deus Ex Machina and Nonmandol, Coyote’s Arrow blend urban angst with open-space atmospherics, together with killer anthemic vocals, tribal imagery and some shamanic messages, reflecting their heavily political attitude, as portrayed through their benefit live shows. Their strong melodic sensibilities shine through the razor-sharp backbeats, often reminiscing of classic US Midwestern punk-rock, acid- soaked in some desert gathering of the tribes. Relentless and free-spirited, these are modern metropolitan Indians, with a clear stance against any sort of human bondage…and some real cool rock ‘n’ roll to light it up! 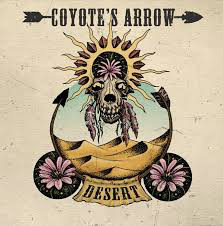